Two days after the Guernsey Ultra marathon and my legs are still screaming at me for the way I treated them on the cliff paths which made up 16 miles of the 36 mile race.

This one was a race I had wanted to do for a couple of years now. Since its conception in 2017 the race has grown from 50 places to 150 and sells out each year within hours of it going on sale.  I put myself on the waitlist for a second year in a row and luckily was offered a place.

Having finished the 10marathons in 10days and the Fox Ultra last month I’d let my fitness slip big time, taking on more junk food than normal and returning to the midweek drink every so often. Apart from the previous mentioned races the only running I had done on the lead up to this was pacing at the Gatwick half marathon for a 1:50 finish time. (I managed 1:49:51. #phew).

I flew out to the Island on the Saturday afternoon looking forward to my 24hour mini break.

I’d booked myself on the 14:40 return flight to get back and help with the twins dinner and bed time routine. This would give me a comfortable 6hours 30mins to get round the course and make it back to the airport. The Fox ultra a few weeks ago was 2 miles longer, had a few hills and was completed in just over 6 hours so this plan sounded doable to me.

My Dad lives on the island so I did not need to worry about food or lodging. I had run the Guernsey marathon in 2017 and 2018 so felt I had a good idea of what was coming for the Ultra. I knew there was 16 miles of cliff path to contend with first but after was under the impression that the rest of the course would be a flat and fast 20 mile road run on familiar territory to the marathon route.  Not the case, Haha!

Discussing the race with the old man we agreed (I was told) that 6.5hours was the absolute limit I had to finish the race to make the flight back home. I was quietly confident in a 6hour finish time. Giving myself 2 to 2.5 hours for the cliffs and 3.5 to 4 hours for the remaining 20miles. Dad, probably more reserved thought this would be tight. He was already twitching about the self-imposed cut off time before lights out on the Saturday night.

7am and the start gun went off. The first mile is flat along the sea front, I went out quick not wanting to get in a bottle neck for the immediate steep climb up onto the cliffs. Instantly the cliffs started and so did the deeper breathing and sweating! I hadn’t seen sweat like this for a long time and so early on in a race! Up and down cliffs. Constantly, all the time.

The miles taking longer and longer for the Garmin to clock. With the terrain uneven when steps did not make up the path I’d seriously underestimated this. Even with the cliffs I was running hard where possible, pretty stupid really (should have saved the running for the last 20miles). Carrying only 500ml of water this was quickly depleting. There were three aid stations on the 36 mile course which were 8 to 10 miles apart and I ran out of water around 2 miles before each one. What a Pro.

On went the cliffs and the time. I eventually got to the end of the 16 mile section well over the 2hr 30mins I had allocated. I would have been quite happy to see the finish line at this point having done the cliffs. This was a brilliant race that I had not paced properly at all and still had 20 miles to go.

Not to worry, only 20 miles left and around 3hours 45 to do it in. Dad met me at the aid station on his BMX and spirits were lifted as the cliffs were over and the flat section was ahead. I ran whilst he rode behind me and we upped the pace to 8minute miles on the road. Mentally this was a lift. No more cliffs, just fast road and time to claw back some serious time. I think a lot of the runners on the race preferred the cliff rather than the road. Nutters! We started taking runners and the mood was good. We probably made a mile when the tarmac disappeared and the dunes, pebbles and uneven terrain returned. Dad bid me farewell as this was impossible terrain for a bike.

Around mile 19 I was done.  The tarmac surface I had visioned in my head was none existent apart from a few sections.  The cliffs had beaten me up and holding an 8minute mile pace was very short lived given the terrain. I made the last aid station at 27 miles, threw my head in the food on offer whilst my 500ml bottle was being topped up.

Whilst gorging on everything that was on the table and with 9miles to go the first lady, who had obviously taken a fall at some stage given the tape, dirt and blood on her came into the checkpoint. I had been chicked! She had clearly paced this one properly. Easy on the cliffs and plenty in the tank for the flat. Far more graceful than me at the aid station, she was nibbling whilst I was literally hands full, shoving the first thing I could see down my throat whilst already eyeing up the next item. I did this at all the aid stations resulting in feeling bloated for the immediate few miles after stuffing my face. I really did not race this one well at all. Wasn’t respecting the course, wasn’t pacing properly, wasn’t refuelling properly, experience turning to arrogance had destroyed me and quite rightly so.

5 minutes later I was chicked again by lady number 2. Another 5 minutes then lady number 3 made it a triple chicked race! There was a serious race going on here with the ladies and great to have seen 30 seconds of it!

I decided to pull myself together and try and keep lady number 3 in my sights. I managed this until the local roads with around 4 miles left of the race. Fatigued and tired and with 40 minutes left on the agreed deadline, navigating the course became challenging, desperate not to take a wrong turn and doubting myself on a few choices I made it back on the final 2 miles to St Peter Port that I recognised from the Guernsey Marathon. Death marching at an incredible slow rate I crossed the line in 6:27. Grabbing my medal with 3 minutes to spare I jumped into the car, engine already running. (Dad was getting a bit anxious). We left the car park to see lady number three come in. She had obviously taken a wrong turn somewhere which had cost her. Damn! Unfortunate but we all did it at some stage. 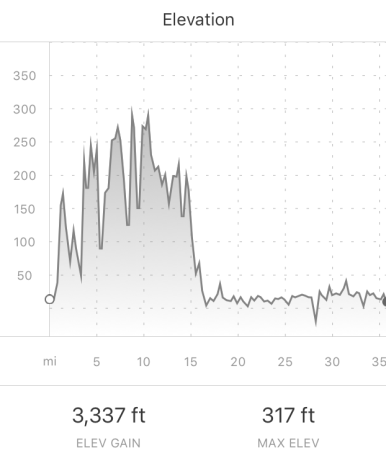 I bundled out of the car, said my goodbyes and put a t-shirt on before going through security with 40minutes till flight time. Great success. Enough time for me to get rid of a Guernsey £1 note I had been carrying in my wallet since last year on a Lucozade to stop the nausea the race had left me with. I downed it and boarded the plane.

Apologies to the lovely woman in seat 14B sat next to me and the layer of salt I was covered in. I must have sweat myself, dried off and sweat myself again at least 3 times on those cliffs! Awesome race, tough and has reminded me how much I love/hate hill running.